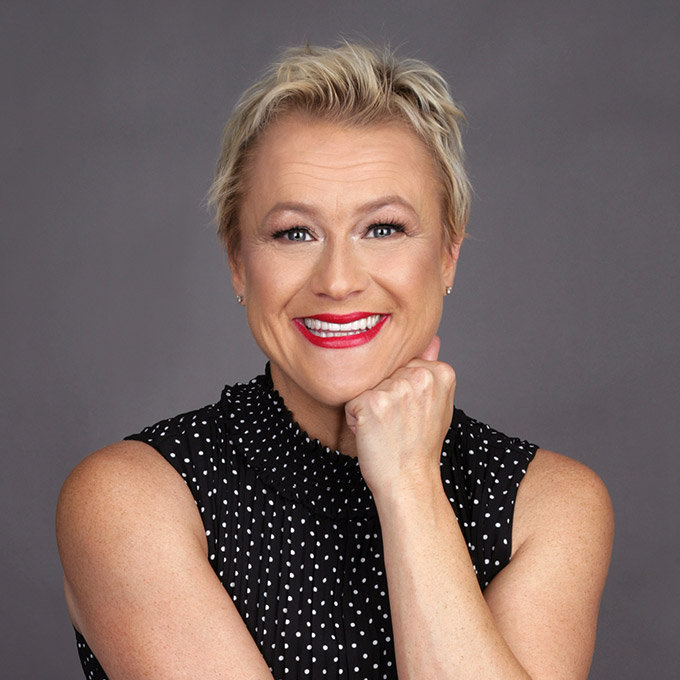 Sophie Mongeon graduated from the University of Montreal in 1996. After articling with Me Desroches, Me Mongeon was admitted to the Quebec Bar in 1997. In 2001, Desroches Mongeon avocats was founded.

Conscientious and involved, she works to defend work and road-related accident victims, sensitive to the fact that they often find themselves powerless. Over the years, she trained several young lawyers who, like her, wanted to take up the challenge of informing, protecting and asserting the rights of those left behind by government agencies that are too often deaf to the needs of victims.

Faced with the death of her father from a nosocomial infection, in 2004 she participated in the creation of ADVIN, the Association of Victims of Nosocomial Infections and became an active member of the Board of Directors.

A formidable litigator, it is with self-assurance and empathy that she defends the victims in hundreds of cases. In 2017, she took on a new challenge by assuming the presidency of Desroches Mongeon Avocats.

Since then, she has made it her mission to inform citizens of their rights. She is legal counsel for the Association of Asbestos Victims (AVAQ).

A recognized expert in her field, she is frequently invited to comment on current events on television and radio, in addition to hosting the podcast À Deux Maîtres. Followed by 50,000 subscribers on TikTiok, her capsules are followed by a new generation of litigants. In addition, on Wednesday mornings, she shares the microphone at 91.9 Sports FM on the program Le livre des règlements where she comments on political and legal sports news.

Her hard work is rewarded as she is recommended by Best Lawyers Magazine for the years 2021 and 2022 as well as Canada Personnal Injury Lawyer of the year 2021 by Lawyer Monthly. 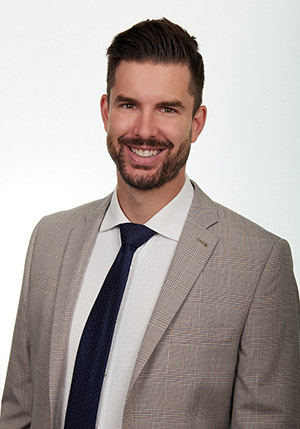 Alexandre knew from an early age that he would become a lawyer, wanting to dedicate his career to helping and representing people in need. For him, a balance of power between the parties is essential for a legal debate to be fair and equitable. It is for these reasons that since 2013, he has dedicated himself to defending the rights of clients who do not have the tools to face compensation agencies, employers or insurers alone.

Alexandre specializes in compensation plans (CNESST-SAAQ-RQ-IVAC), labour relations and disability insurance. Since the beginning of his practice, he has been regularly called upon to make representations before the courts, making him a seasoned litigator.

Aware that his clients are going through difficult times, Alexandre’s ability to listen allows him to accompany his clients through the entire legal process, from the first meeting to the conclusion of the case. 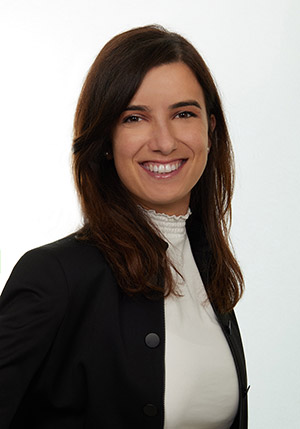 It was her interest in helping people and being involved in social change that led Leila to a career at Desroches Mongeon Avocats. This is a unique opportunity to showcase her extensive academic training in psychology and philosophy, completed at McGill and Waterloo Universities.

Informing citizens of their rights to protect them is a central aspect of her work at Desroches Mongeon Avocats. This is the subject of her master’s thesis: “Fairness through legal literacy: A case for active involvement.” Leila’s strength lies in her self-assurance in court and her perseverance in obtaining the best possible settlement for her clients. 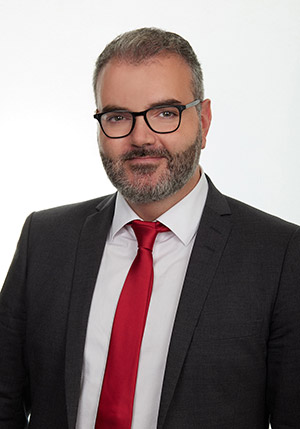 Work is the most important social relationship. It gives us fulfillment and purpose in our lives.

Before starting a career in law, Francis worked in computer science for several years. Not being professionally accomplished, he decided to reorient his career towards law and graduated from the Université du Québec à Montréal. 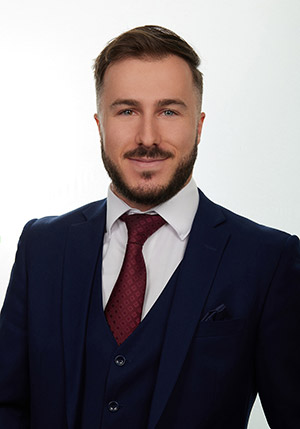 A graduate of the University of Montreal and a member of the Quebec Bar following the completion of his articling term at Desroches Mongeon Avocats, Arnaud is passionate about the defense of human rights and sports law.

In order to include a social vocation to his career, Mr. Anderson returned to the practice of law after a stint in sports marketing. For him, law is first and foremost an emancipatory tool to prevent injustice and fundamentally protect the interests of the most vulnerable.

A positive leader with an infectious laugh, he is a competitor at heart who defends and represents his clients with heart, dedication and determination in his battles. 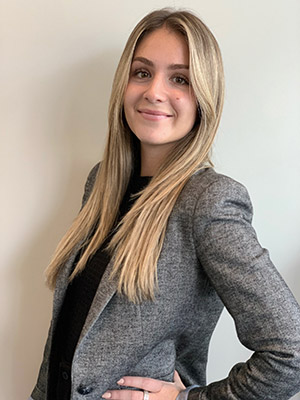 Sabrina holds a Bachelor of Law degree from UQAM and completed her articling at the Quebec Bar in criminal and penal law. During her studies, she became involved in the legal clinic at UQAM where she gained her first legal experience. Motivated by her need to help others and her desire to continually improve her legal knowledge, she joined the team at Desroches Mongeon Avocats.

With her heart set on defending her clients’ rights, Sabrina stands out for her ability to listen and her sensitivity in understanding your situation. Hard-working and motivated by victory, she is fully committed to your cause. 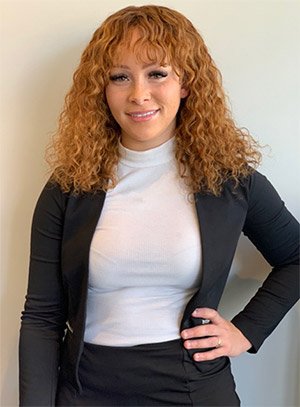 When she was young, Raphaëlle saw her entourage experience injustice in their workplaces, which motivated her to study law. During her studies in paralegal technology, she noticed a marked preference for labour law. Starting a job at the CNESST, which further strengthens her love for labour law, she then joined Desroches Mongeon Avocats and fulfilled her need to make a significant difference for people facing various injustices. Raphaëlle is an excellent paralegal who is greatly appreciated by her co-workers for her competence and hard work. 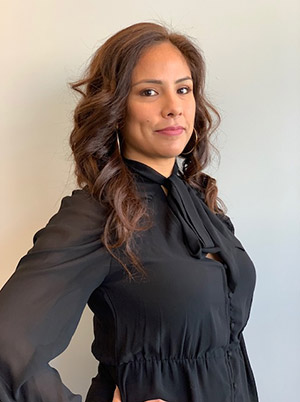 Having studied analytical chemistry at college, she quickly realized that this was not her field of passion. The human and mutual aid approach was missing. While she was questioning herself professionally, she was involved in a serious car accident in 2010, which could have cost her life. She was bedridden for almost 2 months without knowing if she would ever walk again, and the questioning was even more profound.

Having fully recovered, she is now a competent legal assistant at Desroches Mongeon Avocats and feels like she belongs here. In helping people who have been in a car accident, she is in a better position than anyone to understand and assist them, having experienced a similar fate herself. Her accident led to a 10-year absence from the workforce. Her work at Desroches Mongeon Avocats allows her to fulfill herself and gives meaning to her past experiences. 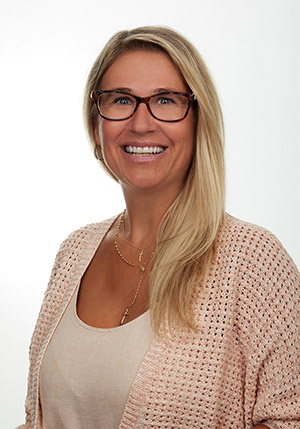 Eve works as a receptionist at Desroches Mongeon avocats.

Coming from a family of 5 girls were listening and helping each other were essential, Eve studied special education to help the most disadvantaged ones and students in difficulty. Her employment at Desroches Mongeon Avocats allows her to share her values and knowledge with victims of illness and accidents.

Mother of 3 children, her patience is exemplary which makes her the perfect person to take your calls and welcome you to our office, always with a smile.

DESROCHES MONGEON AVOCATS IS FIRST AND FOREMOST A MATTER OF THE HEART. A NEED TO FEEL USEFUL IN THE COMMUNITY, TO LISTEN, TO MAKE A DIFFERENCE.

For 29 years, Martine Desroches devoted herself to the practice of administrative law. She founded what would become the largest law firm in Quebec specializing in the representation of road and industrial accident victims. In 2017, she was appointed judge of the Administrative Labour Tribunal and will leave the firm to take up this new challenge.

Sophie Mongeon, admitted to the Quebec Bar in 1997, articled with her and in 2001 the two lawyers became partners. In 2017, Me Mongeon took over the management of the firm and continued the mission they had set for themselves, that is, to transform their office into something quite different from other traditional law firms; a place where people feel supported, listened to and helped in their legal and administrative procedures.

Since Mrs. Mongeon took over, Desroches Mongeon Avocats has expanded its range of services by offering its clients legal services in labour relations, civil law and insurance.

The firm also offers customized training to workers’ associations, unions and businesses. All of the lawyers can act as speakers or prepare luncheon presentations according to the needs of their clients. For example, this type of service has been offered to various medical professionals so that they understand the importance of their collaboration in a road accident or work-related case.